The Legend Of Stuck In The Muck 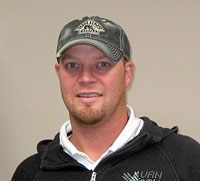 2010 was a wet year for Saskatchewan farmers. With near record rainfall across the province, many producers found themselves in sticky situations in their fields: large combines sucked into the muddy ground; a sprayer so stuck it rested on its two back wheels; ruts three to four feet deep. Even backhoes that came to “rescue” the equipment got stuck just as bad.

Jody Kemp with Flaman Sales in Southey started to see these mucky predicaments firsthand. Almost every customer or friend he spoke with had gotten stuck at one point and kept sending him photos. Each one was unbelievable. But Kemp soon realized this wasn’t just happening in southern Saskatchewan – getting stuck in the muck was a province-wide epidemic.

“It’s no secret everyone in the province got their equipment stuck in the mud,” he says. “As farmers, we were all in this together.”

Because everyone was facing the same situation, Kemp thought it would be neat to have a place where farmers could share their experiences. And thus was born the Great Saskatchewan Stuck in the Muck Photo Contest, a website where producers could upload their best stuck photos and have a chance to win great prizes.

“Getting stuck is depressing at the time, but when you look back at the photos afterwards you can laugh,” Kemp says, “If a guy was having a bad day and he sees a picture of someone 10 times more stuck than him, it might make him feel better.”

“We feel for all of the farmers and care about the wellness of our customers,” Kemp continues. “This was a way to build community with the agricultural producers.”

And the online community at stuckinthemuck.com quickly grew. More than 360 photos were entered from across Saskatchewan. Over 2,300 people “Liked” it on their Facebook page. Since the contest launched Nov. 8, 2010 there have been almost 97,000 visits to the site and 1.3 million page views.

“This contest exceeded our expectations,” Kemp says. “I think it became so popular because everyone was in the same predicament. Everyone could sympathize with each other. While getting stuck was depressing at the time, people are looking at the photos and laughing about it now.”

Let Us Help You Get "Unstuck"

Enter the email address that you used to sign up
and we will send you your password.